The main objectives of programming the basic settings of cardiac resynchronization therapy (CRT) are a) the maintenance of consistent BiV capture, and b) the optimization of hemodynamic function. CRT recipients suffer from a variety of underlying diseases. Therefore, the optimization of CRT must be tailored to each patient’s characteristics, as well as take into account the detection and treatment of ventricular tachyarrhythmia.

In absence of sinus node dysfunction (SND), the basic heart rate (HR) should be kept slow in order to limit the percentage of atrial pacing as much as possible and to preserve the physiological activation of the left atrium and spare the battery. While both the VDD and DDD pacing modes can be programmed, the DDI mode should be avoided in absence of SND. In presence of SND at rest, whether endogenous or drug-induced, atrial pacing is mandatory. The DDD mode with rate response is preferred (in case of chronotropic incompetence) and the VDD mode must be avoided.

While there is no consensus regarding a minimal HR applicable to all patients, a basic pacing rate of 60 bpm is probably associated with a higher cardiac output than a rate of 40 bpm, without increasing the myocardial oxygen consumption. A resting HR >70 bpm should be avoided, although in presence of frequent ventricular extrasystoles or slow VT, an increase in the minimal HR may alleviate the arrhythmic burden and increase the BiV stimulation rate. However, these effects are usually temporary or only partially effective. One can also program algorithms to lower the incidence of atrial fibrillation (AF) by increasing the HR and forcing atrial stimulation. The benefits conferred by these measures in recipients of CRT systems remain to be shown.

Algorithms have been developed by the device manufacturers to limit the percentage of ventricular stimulation, which is the inverse of the effect sought by resynchronization. It may be useful, however, when BiV stimulation needs to be interrupted, in case of lead dislodgement or in patients worsened by resynchronization. This kind of algorithm is programmable in modern CRT devices made by Microport (Safe-R) or Abbott (VIP) and Biotronik (Vp suppression), but not Medtronic (MVP) or Boston Scientific (RYTHMIQ). 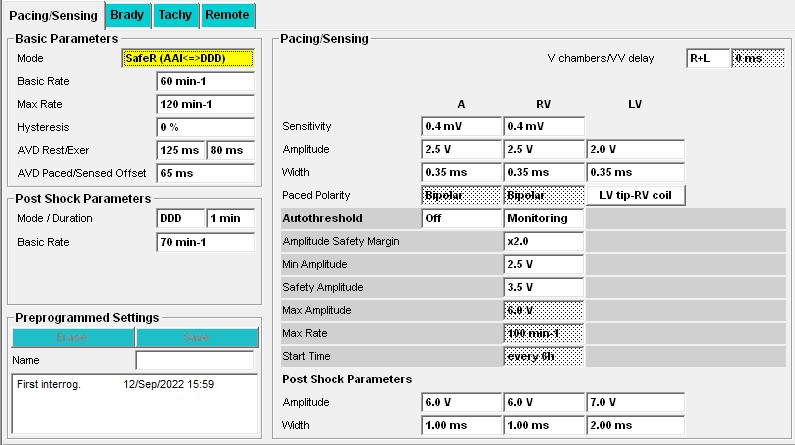 Example of a MicroPort CRT-D (GALI DF4) which allows programming of a mode which avoids ventricular pacing (Safer mode).

The principles of the rate responsive algorithm are detailed in the chapter dedicated to the programming of CRT during exercise. Spontaneous as well as drug-induced chronotropic insufficiency is often observed in patients suffering from heart failure. The programming of a rate responsive function in these cases increases the patient’s exercise capacity and improves the quality of life. The DDDR pacing mode should be favored in patients whose heart rate at peak exercise is <70% of the maximum predicted. In contrast, in presence of a normal chronotropic function, a rate responsive algorithm should be avoided, as it may unnecessarily increase the atrial pacing rate, increase myocardial oxygen consumption, and disturb hemodynamic function.

Patients suffering from heart failure are at high risk of developing episodes of atrial fibrillation. Therefore, a mode switch function should be systematically programmed. If the patient is in atrial fibrillation, a slightly increased resting heart rate (70 bpm for example) along with rate responsiveness, increases the percentage of BiV stimulation. 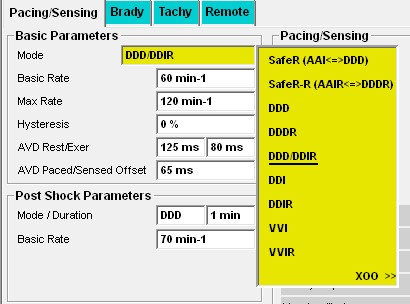 In MicroPort devices, DDD/DDIR mode enables activating of the rate response mode after a mode switch. This avoids unnecessary atrial pacing during sinus rhythm while also avoiding a fixed ventricular rate during AF.

The main objective of device programming is to obtain a percentage of BiV stimulation approaching 100%. Therefore, any ventricular oversensing inhibiting BiV stimulation must be thoroughly eliminated. Ventricular sensing must be programmed to avoid P and T waves sensing, as well as ventricular double counting, which imay occur in these patients in whom conduction disorders are prominent, while preserving reliable sensing of the ventricular electrograms, a key to the flawless function of a defibrillator. Atrial undersensing may also lower the percentage of BiV stimulation. Exercise and an increase in respiratory motion are often the cause of unreliable atrial sensing. Therefore, a wider safety margin must be programmed than for sensing under resting conditions.

LV sensing in a defibrillator

LV sensing is not available with the Medtronic, Abbott and Microport CRM defibrillators. Switching from RV sensing to LV sensing is currently only possible in Abbott CRT-P devices.

In CRT devices it is not possible to use the LV lead as the sensing vector (with exception of Abbott CRT-P devices).

Share this page:
Programming aspects to maintain high %CRT
Atrial fibrillation
Return to 5. Maintaining high %CRT
This web site uses cookies to store information on your computer. Some cookies are essential to the operation of our site, while others are designed to improve the user experience. By browsing our site, you are informed to the use of these technical and functional cookies. You can change the cookie settings at any time by modifying the parameters of your browser. Other cookies may be subject to your prior consent.
Read MoreCookie settingsACCEPT
Privacy & Cookies Policy